Rightsizing: Shudder. Others group formerly separate concepts under a single relevant category. Managers replaced conventional words with coinages to try to change the way employees thought about their jobs. Objectives: the objectives of the key result areas of the business; in most plans written as a list of tasks. Take them on a journey. Please stop it. And to be honest, I do think that sometimes we have to take a moment and look at the language we are using. Job satisfaction: the combined attitudes and beliefs positive or negative that are held about a job, usually on a real downer when the decentralisation project does not devolve power but just tasks. Collaborate: So so misused. Never use it outside of a business case! 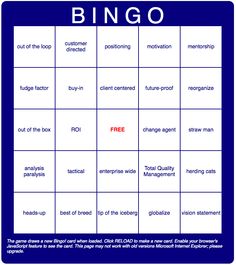 Collaborate: So so misused. Oh wait… another buzzword bingo sheet? Key Result Areas: the areas of the business where the result is key to the business performing well; in most plans written as a list of tasks. Synergistic: You mean it all fits together?

Take them on a journey. Stop it.

At the same time, large, impersonal corporations were looking for ways to build a sense of connection among their employees. Time box: A project planning term which means thinking about deliverables in a fixed period of time.